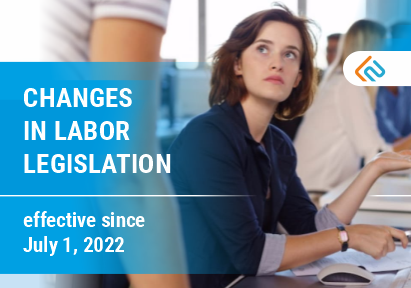 Changes introduced into the labor legislation of Ukraine after July 1, 2022

During martial law the President of Ukraine signed a law on ‘Changes to some legislative acts of Ukraine regarding the organization of labor relations’. Let us check what has been changed.

The business sector is now finding itself in dire straits. In order to support it, the parliament is issuing new laws. However, one man’s loss is another man’s gain.  What has changed after the Ukrainian parliament passed the new law on July 1?

New amendments have been introduced to article 36 of the Code of Ukraine on Labor.

The following individuals are subject to dismissal:

Terminating a labor contract is possible if an employee cannot be provided with work due to the absence of their workplace or if there is no possibility to provide them with another job within the same company. This may be the case if premises (property) of the owner of the company have been destroyed as a result of hostilities.

In a peaceful time such a dismissal would require approval from the trade union. However, in the current situation the trade union is informed 10 days before dismissal of an employee. The employer is required to offer the dismissed employee financial assistance that would equal an average monthly salary.

In the event of the employer’s death, the employee should contact the employment agency and submit their relevant application in the paper or e-form.

New changes into the termination of a labor contract

Such a step is taken during martial law and regards the absence of possibilities to fulfill the obligations of both parties of the previously signed contract. Either party has the right to initiate the process of termination of labor relations. Should the employer wish to resume operations of their business, they have to notify the employee 10 days before such a decision comes into force.

As for officials working at state institutions or representing local authorities the conditions are the following: termination of the agreement has to be approved by the local military administration.

One can appeal the decision of termination of the labor contract at the State Labor Service (hereinafter: SLS). If terms of such termination are violated, the employer shall receive a notification canceling their decision to terminate the contract. Should the employer consider themselves an injured party, they shall be offered the opportunity to appeal the decision of the SLS in court during 10 days.

During war unformalized labor relations and the legality of the termination of contracts may be checked at random. Compulsory check is conducted if the SLS receives a relevant request from a military administration.

The situation with salaries and leaves

Who will compensate for a salary or other payments during the period of labor contract termination? According to the law of Ukraine ‘On the organization of labor relations under martial law‘, the Russian Federation shall carry out this task, since it has attacked a peaceful country.

During three months after the law comes into effect the Ukrainian government is supposed to work out the procedure of compensation for business owners and employees for their lost profits. Financial resources are expected to be received from international aid and Russia. They will be used for the purpose of the recovery of our country.

The employee (who is trying to get compensation for the profit they lost) will be given 3 months to submit a grievance after they are fired. The countdown will begin after they receive a written notice about money they should receive and have already received. This notice is to be forwarded to the employee by the employer through a secretary on the day when the former is fired.

If the employer has failed to pay their now ex-employee, they will have to pay them an average salary during the next 6 months.

In terms of employees working at the objects of critical infrastructure, their working schedule may be expanded to 60 working hours a week. Their salary will be increased accordingly.

A new chapter in the new law is dedicated to leaves.

– Voluntary resignation during the time of hostilities requires financial compensation for the unused days.

– Should the employee be relocated to a different company, financial compensation for the unused leave shall not be paid, nor shall it become the obligation of the employee’s new employer.

Attention! The standard leave includes not only working days, but also days off and holidays.

Changes regarding those conscripted into the army and contract soldiers

Employees are indignant at employers not providing any guarantees for the payment of average salaries for those conscripted into the army or contract soldiers. This was the case back in 2014. However, currently any such compensations are canceled. Ukrainian MPs have received new instructions from the main legal department of the parliament regarding amendments to the law. It has been suggested paying compensations from the state budget, as it has been done before. However, no further changes have been implemented.

Business people who have employed people at their companies, opine that the state should take care of those fighting on the frontline as well as pay them. However, it is necessary to distinguish between such terms as ‘average salary‘ (a definition used in the field of labor relations) and ‘financial support‘ (payments for the military).

There is an intention of adding another amendment to the article 119 of the Code of Ukraine on Labor. Average salary is to be retained for the employees serving in the army. They won’t be required to perform their labor duties while the government will provide them with financial support which will differ according to their rank, duration of service and conditions thereof.

It is for this reason that those military people who are protecting their motherland will receive:

– salary in accordance with their rank and actual position in the army;

If a soldier is taken prisoner of war, has gone missing or has fallen in the fight for Ukraine’s freedom, payments are made to their closest relatives, parents, children or children’s caregivers.

Workplaces and positions of those who will return after war will be retained.

These changes will alleviate the financial responsibility of employers, since in the situation when the employee is absent for several months their duties are either performed by others or by nobody at all.

What awaits those who have been conscripted into the army before the law ‘On changes to some legislative acts of Ukraine on the optimization of labor relations’?Back at that time all labor payments were to be made by the employer.

Of course, there will be attempts to curb the rights of employees. However, during martial law the effect of article 43  of the Constitution of Ukraine, which grants every citizen of Ukraine who has reached the age of 18 the right for work, may be restricted.

We are hoping that after our victory over the Russian aggressor lawyers an MP will reintroduce legislative norms and will continue working out all gaps in the labor legislation.

Relocation of employees to Ukraine